Nepotism refers to favoritism aka preferential treatment of relatives and friends during hiring process, regardless of others who might be more qualified for those positions. 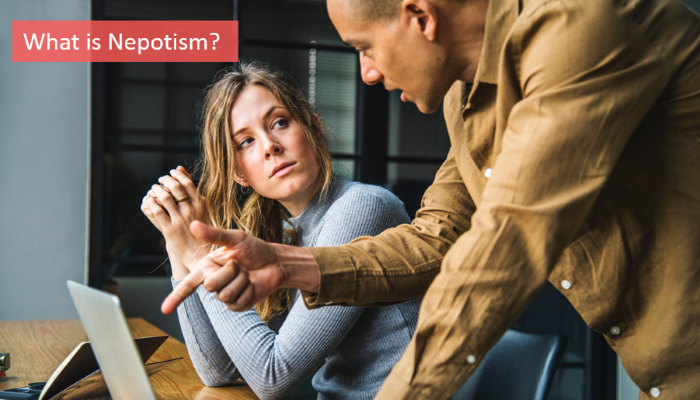 Nepotism refers to favoritism aka preferential treatment of relatives and friends during hiring process, regardless of others who might be more qualified for those positions.

Nepotism can decrease the morale and commitment level of other employees since they feel discriminated against.

If you pay attention to nepotism you’ll see that nepotism can be found everywhere you look. Great examples of transparent nepotism are highly successful businessmen who pass their business down to their children or relatives.
One very famous example of nepotism in business is Rupert Murdock, owner of one of the biggest media conglomerates in the world. His son James Murdock, despite being a college dropout has been working for the company for a number of years and was on a board of directors in News Corporation from which position he resigned last year.
In such a big corporate setting there are strict rules that apply to climbing up the corporate ladder - level of degree required, years of experience and other formal education. While on one hand Murdock Junior might have been a good fit for the role based on the skillset he acquired over the years, on the other, he wouldn’t even be able to enter the organization a long time ago based on initial requirements.

Negative Outcomes of Nepotism in an Organization

Nepotism can work both ways. It is sensible to try and keep the ‘business within the family’, but there are many scenarios in which it can do more harm than good.
Hiring relatives to do the job that is highly paid and considered to be prestigious creates a feeling that no one else can even reach that position. It feels given and decreases motivation among your staff to try and to the best they can to go up in the hierarchy.
Consequently, employees lose a sense of belonging and their commitment can be compromised, since now they will consider switching jobs for a company that will allow them to grow to the top.
Ultimately, having family members run a business can simply be a bad business decision. Your subjectivity can cost you money and build a negative reputation for your business.

How to prevent nepotism in an organization?

There are multiple ways in which you can prevent nepotism from occurring at your company on all levels. Here are some of the tips for creating a nepotism-free organization:

Struggling to standardize your hiring?

Thanks to TalentLyft you can create a transparent and standardized hiring process that will make your hiring faster and more successful. Create a referral program with one centralized candidate database and eliminate any signs of nepotism in your organization! Get your free trial now!