How to Create as Inclusive Job Postings as Possible?

All around the globe, companies are increasing their efforts in creating more inclusive working environments. Most of them seem to be focusing on communicating the importance of inclusion on their website, social media channels and sometimes showcasing culture videos in their job ads.

However, not many of them are aware that how you write and disperse job postings is an equally important factor in creating a more inclusive workplace. Since many still don't realize that job postings are the first touchpoint a candidate has with your company, it is essential to manage to successfully and truthfully represent your company, in this short form - making the task even more difficult.

For that reason, we decided to write an article explaining how you can create a job posting that will be as inclusive as possible and make sure that you're not excluding a particular group of talent unconsciously!

Unconscious bias is a dangerous thing that affects most of our opinions and actions. Yet, so many people are not even aware of it - it makes sense since it's an unconscious bias we are talking about.

However, even if some are not aware of it impacting their day-to-day decision-making, it should at least be a standard that everyone is educated enough about the existence of unconscious bias and its role in people's minds.

So, for anyone unaware of this term, unconscious bias is often defined as social stereotypes about certain groups of people that individuals form outside their conscious awareness. What's interesting about unconscious bias is that research suggests one develops unconscious biases at an early age, which has repercussions on a person's behavior. But, most importantly, it's also malleable - meaning one can take steps to minimize the impact of unconscious bias (Dasgupta, 2013; Dasgupta & Greenwald, 2013).

Due to these characteristics of unconscious bias, the most important thing becomes being more aware of our unconsciousness! And this is the exact thing we will be discussing in the following paragraphs. Since many are unaware that unconscious biases can sneak in a while writing job posts, we'll be giving you a good look into everything you should think of when writing it!

Create an inclusive recruitment process with TalentLyft
Whether you're looking to improve your communication regarding diversity or struggling to find relevant, diverse job boards to publish your job postings, we got you covered! Book a quick call with one of our product specialists and learn more.
Book a quick call

How to create inclusive job postings?

As already mentioned in the article's introduction, job postings are often the first touchpoint a candidate has with your company. So, portraying the position and the company culture truthfully is highly important for building brand reputation in a candidate's mind.

There are multiple things you should have in mind when making sure your job postings are as inclusive as possible: 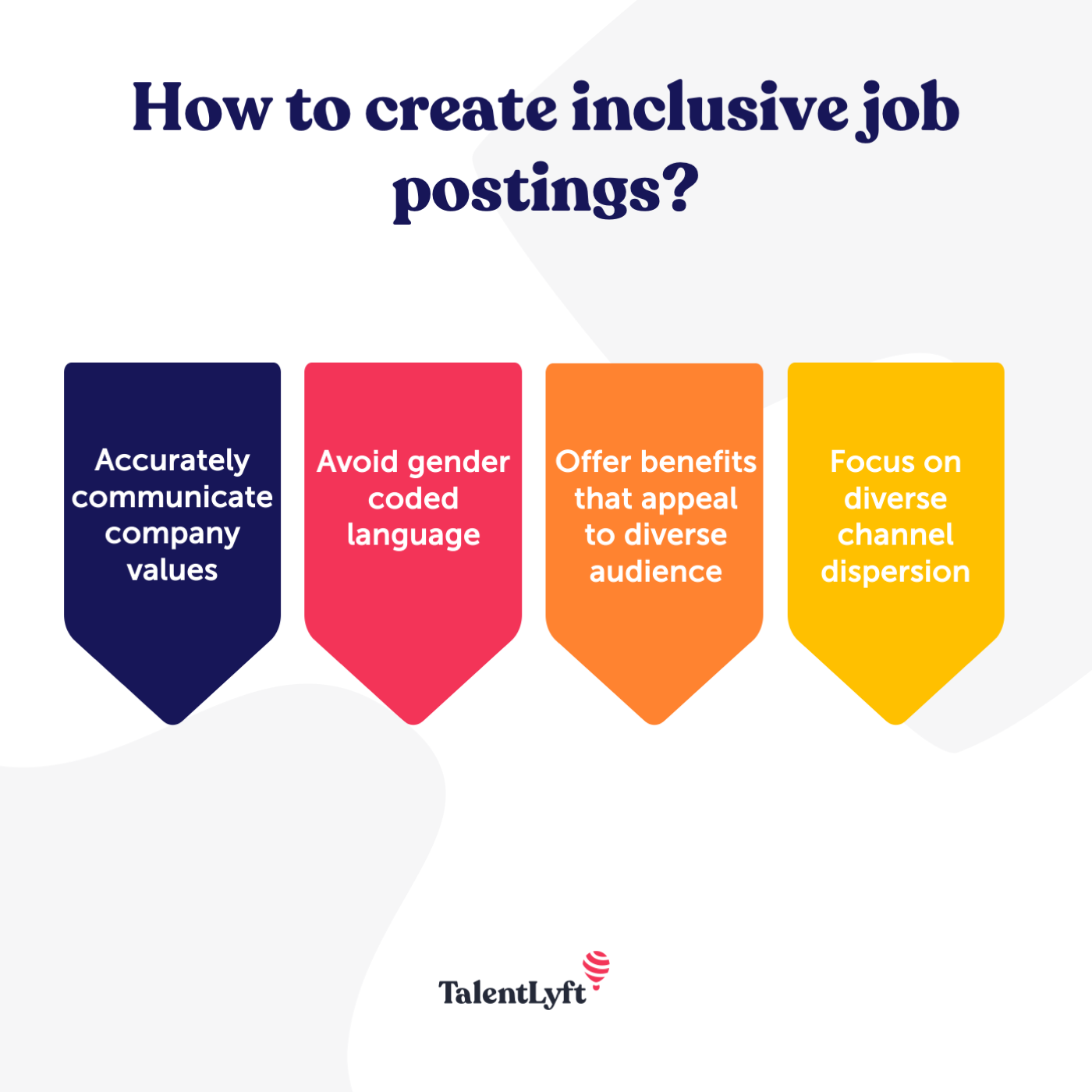 Even though they are in a relatively short text form, job postings should always reflect company values. And what's even more important is that they should do it truthfully! There is no point in writing down some buzzwords to explain your culture if those buzzwords don't stand for anything happening in the workplace.

Here is one good example we found in an article by Patty McCord, former Head of Culture and People at Netflix. The author is now a consultant to many successful companies worldwide and a renowned author. She found that startups often try their best to be perceived as a relaxed environment in which employees are simultaneously required to be highly efficient while being encouraged to "finish their game of table tennis amidst a big meeting."

This means that she talked to the CEO of one growing IT company and asked him what the most important value was to them. The CEO mentioned: "Efficiency." As they were having a conversation, an employee played a table tennis game as a form of relaxation before the meeting. The author then asked the CEO what would be more important to him - making sure that the person came prepared to the meeting, cut short the table tennis game, or finished the game. The CEO replied: I would tell him to finish the game first!

The author stood surprised, stating that having efficiency as the most critical company value while encouraging employees to "finish up the game of table tennis" showcases enormous contradictions between perceived values and reality.

To go back to the job postings and how they should be written - this example perfectly reflects the importance of being truthful when communicating your values and implementing them. And sometimes this means that even the CEO needs to be honest to themself!

We believe not many people are even aware of this - but the language we use can be highly stereotypical and non-inclusive for all genders. Here is how the European parliament defines gender-neutral language:

When it comes to job postings, it should be the recruiters' priority to write them in a language that will resonate with both men and women without excluding one or the other.

Here are some examples:

As a solution, we advise you to research the terms before writing a job description and, even more importantly, ask for feedback from your colleagues - preferably input from both men and women at the office. These kinds of things may be difficult initially, but once they become a part of your conscience, it will be much easier to start changing things.

Offer benefits that appeal to a diverse audience

Creating a culture of inclusiveness requires a genuine effort from the company leadership. This means that the benefits should also be designed to appeal to a diverse workforce. More specifically, if you're offering benefits such as bonuses for high performers and an office environment with gaming corners and space to relax, this may be appealing to some candidates but not to everyone. For instance, women are more likely to apply for a company that offers parental leave.

Here are some benefits that you could consider to create a more inclusive environment for your employees:

When it comes to writing a job description, it would be beneficial to mention such benefits to portray your candidates firsthand what they can expect when joining your company.

Besides the pure content of your job description, it is equally important to know where to post your jobs to attract diverse talent. Though this may be a difficult task, it should be a priority to investigate various job boards and know what talent spends time on which job board. In addition, you could consider multiple specific portals besides the obvious choices like LinkedIn, Glassdoor, or Indeed.

Here are some groups of candidates you should have in mind when thinking about where to post your jobs to increase diversity and inclusion:

Want to reach a wider pool of candidates with your job ads?
With TalentLyft you can post your job directly to one of the 2000 job boards worldwide to reach the right talent!
Learn more

Keep learning about your biases

Once you have your job decision written in an inclusive language by communicating important company values and dispersed across diverse channels, you may think the job is done. However, the thing about biases is that they are likely to sneak up on you throughout your entire life without you even realizing it. Unfortunately, there is truly no way to learn a few tips and tricks and eliminate bias since our whole lives we form opinions and therefore stereotypes arise.

The only proper way of decreasing personal biases, and from there on, creating a working environment reflecting such values, is continuous learning. Learning and turning unconsciousness into conscious behavior is what you can start doing for yourself and the company you work for, and there is no way that the company culture won't benefit from it! 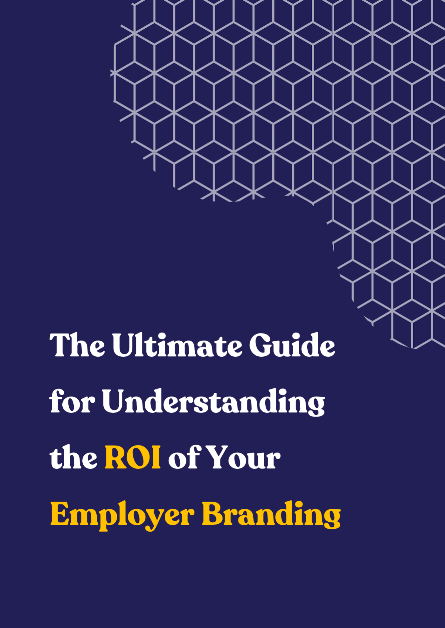 Vulnerability in Employer Branding: Why to Avoid Bragging on Your Career Site

How to Generate More Recruitment Leads Through Video Marketing

Why Should You Attract And Hire Students at Your Company?

How to Optimize Your Hiring Process for Specific Hiring Needs?

A Brief Guide to Recruitment Marketing Automation and Its Applications

The Ultimate Guide To Recruiting Agents for Your Team or Brokerage