Terminating Employees: When and How to Fire Someone?

When should you fire an employee? And how to do it?  We compiled a list of 5 most important questions every employer should ask themselves before firing someone. Asking these questions will ensure that your decision is legally defensible and ethically right.

A question often asked by employers: How to decide if I should I fire someone?

Making the executive decision to fire someone is never easy.

This is an aspect of managerial work that is often not addressed in business school but it is extremely important.

If not handled correctly, employee turnover can have serious negative effects on your business results, your team and your Employer Brand and talent acquisition strategy.
This fact, paired up with the responsibility you will be carrying for somebody else’s life can be devastating.

This is why you should dedicate some time to careful preparation for this process.
In order to help you successfully prepare for this situation, we created this list of 5 key questions every employer should ask themselves before firing someone.

What to do before firing someone?

Before finalizing the decision to fire someone, you’ll need to ask yourself several key questions.

Here are the 5 most important ones: 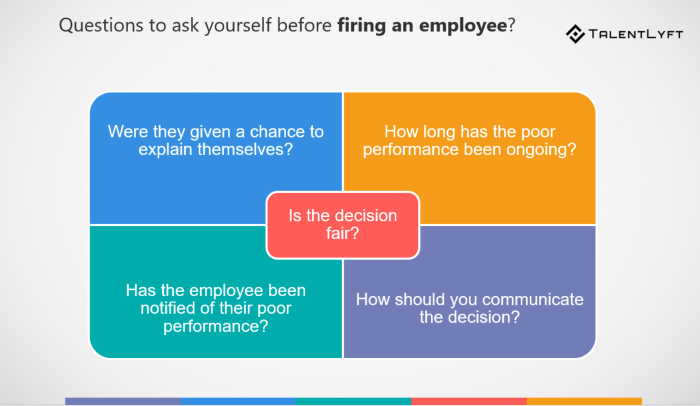 Question #1: Is the decision fair?

That’s a bit of an ambiguous question to ask but fairness when firing an employee is of paramount importance.

Where did incriminating information about the respective worker come from? Do they have a proven track record of poor performance? Are there any red flags to be mindful of?

A valid reason that is substantial enough will be needed to justify the decision. A person that violated a small part of the corporate policy will usually deserve a second chance. Otherwise, you’ll need to get rid of everyone who committed the same violation.

There should be clear criteria and a standardized approach to letting go of a worker. Otherwise, you simply cannot be sure that you’re doing the right thing.

Question #2: Were they given a chance to explain themselves?

Everybody deserves a chance to plead their case. Even if a face-to-face meeting cannot be scheduled, let the worker explain their side of the story.

Most companies have policies in place when it comes to providing employees with an opportunity to explain the situation. In addition, this is the ethical thing to do. New information could be revealed that will affect your final decision.

Even if you are 100 percent confident that a serious violation has occurred, a worker who’s bound to get terminated deserves one final conversation with you.

Question #3: How long has the poor performance been ongoing?

A person should have a proven track record of consistently poor work. A single failure or a problem shouldn’t be used as a reason to terminate someone.

Everybody makes mistakes. These mistakes should in no way be a cause of an immediate termination. Just think about it - chances are that you’re not aware of many issues in the firm. These were probably addressed or covered up because they were not relevant enough to reach the management.

Repeated poor performance is a completely different thing that will have to be addressed in one way or another. It will be up to you in such situations to determine whether immediate termination is warranted or if you should undertake another kind of disciplinary measure.

Question #4: Has the employee been notified of their poor performance?

A proven track record of poor performance on its own is not enough. The next question to ask yourself is whether the worker was notified.

Every employee should be informed about their problems and given a chance to enhance the performance.

There should be a formal notification delivered by the HR team in such instances. Otherwise, the worker may be completely clueless when it comes to the ways in which they missed the mark.

For example, there is a whole system at writing company Essays.Scholaradvisor, which controls the quality of employees work. Writers receive feedback about the tasks they completed at the end of every month with notes and recommendations so they could be aware of their situation in the company.

Question #5: How should you communicate the decision?

If you are 100 percent confident that a certain person will have to be let go, you will next have to determine when and how to deliver the news.

Some people do expect termination because of their poor performance. This is particularly true for workers who are already disengaged.
In other instances, however, the news will come as a harsh blow. You can’t be certain how an employee is going to take it.

There are no universal formulas when it comes to which day is best for letting workers go. The sooner you do it, the better. Don’t stall until the last moment because you feel uncomfortable with the role.

A final thing to think about is your personal safety. Workers may become aggressive upon the delivery of bad news. If you are concerned that the individual is going to overreact, have another person present in the meeting room with you.

Stick to the plan, even if you face emotions like confusion or anger. Don’t let them change your mind - you know that letting go of the person is best for the organization and best for them in the long run, as well.

Advice for employers who have to fire someone

You will probably doubt the decision before delivering the news but if you’ve done a thorough analysis, you shouldn’t. Negative choices are the most difficult ones to make and letting somebody go will test your managerial skills.

This is why you should dedicate some time to getting prepared. When you’re confident that protocol has been followed, do the job quickly and efficiently.

We’ve all been there. Bad hires happen. An employee who seemed like a perfect candidate performs disappointingly. Or does a major mistake that can not be forgiven. In one way or another, this person has become a problem or a stumbling stone on a company’s way to success.

In order to prevent this case scenario in the future, you should hire the best talent by finding the perfect fit. Unsuccessful hires will always happen. However, there is a way to reduce these mistakes to the very minimum!

Learn how TalentLyft can help you improve your recruiting and hiring strategy.

Laura Buckler is a contributor, a freelance writer and a marketing researcher. She is passionate about information and all the unlikely places where it can be found. Her strong point is a holistic, integrative view of her work. You can follow her on Twitter. 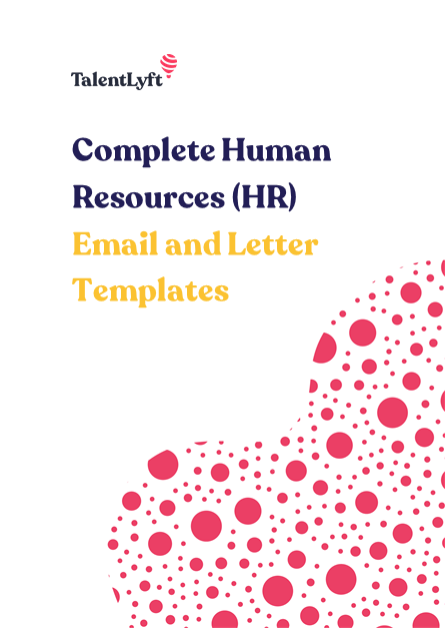 To help you save time, we have created a library of most common HR Letter Templates - from offer to termination letters!
Get free templates

A 5 Step Guide To Creating A Purposeful HR Content Strategy

Getting Executive Buy-in for Recruitment Software in 2020

Recruitment Software: How to Choose the Best Recruiting Tool?

A Guide for Setting Up an Employee Referral Program

HR Metrics: How and Why to Calculate Employee Turnover Rate?

[GUIDE] How to Segment Your Talent Pool

Employee Handbook: The What, Why, How and Who