Address Technostress to Keep Your Employees

Technostress, the stress created by technological devices, is one of the biggest sources of stress in the workplace. Technostress is an unfortunate reality in our modern age, but by making a concerted effort to address it in your company, you can use it to your advantage when recruiting people and retaining your current talent.

How to keep your employees?

Retaining employees often means giving them more. You need to nurture and engage your talent to stop them from leaving. To do that, you need to give them more flexibility, more vacation time, more benefits, more gaming tables, it’s usually about how much more you can give them while still maintaining a profit at your company.

But, there are also things you can give less of that will appeal to current and potential employees. One of the best things you can give less of is technostress, or the stress created by technological devices. In the workplace, that usually means email, although it could also be text messages or social media messages, basically any message that gets to employees during non-work hours that they feel obligated to respond to.

According to the latest CIPD/Halogen Employee Outlook report, 40% of UK workers admit to actively checking their work mobile or emails at least five times a day outside of working hours. 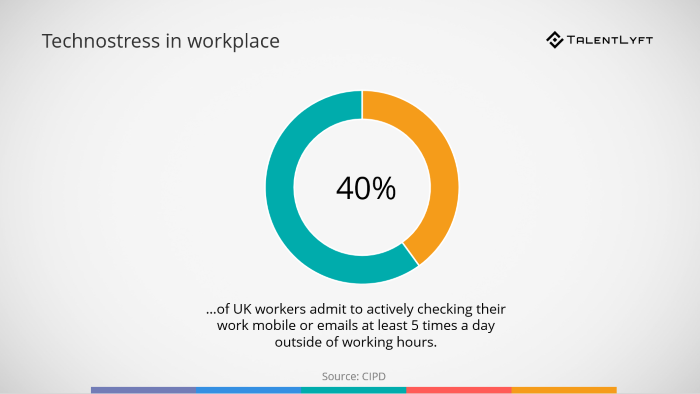 Consequences of a technostress at the workplace

Stress is pervasive, and technostress can actually lead to physical health problems among employees, says Cary Cooper, who is an organizational psychologist at Manchester Business School. If you want to avoid burnout and keep your employees, you need to take some measures to address it.

It’s not just employees themselves that can suffer from symptoms like anxiety and depression from receiving work communication outside of working hours, according to a study published in November of 2017 in the Academy of Management journal, it’s their families that suffer, too, as the excessive email plays havoc with their work-life balance. That same study also says that merely expecting to receive emails outside of work hours is enough to trigger symptoms in people.

Addressing technostress in the workplace

Tackling stress in the workplace is very important. Technostress has been acknowledged for years by people who study the human mind and it has recently been recognized by both governments and corporations, with France passing a law last year that guarantees a worker’s right to ignore work emails received outside of regular working hours.

Companies, too, have taken steps to alleviate work emails outside of working hours, with both BMW and Volkswagen implementing policies to eradicate the practice.

As technostress is still a relatively new phenomenon, this gives you the opportunity to be a leader in your industry when it comes to this unwelcome phenomenon. Guaranteeing that employees are not obligated to answer or even check any work-related emails outside of their usual shifts is both an effective retention tool and an attractive recruiting device.

How to cut down on technostress in the workplace?

To cut down on technostress in your organization, do the following: Nothing shows you’re serious about something in your company like putting it in writing. Make it an official policy that you guarantee employees don’t have to and shouldn’t feel obligated to answer any emails, text messages, phone calls or social media messages that pertain to work when they are not at work.

Take it a step further and state that managers are not to try and contact employees about work-related matters outside of their normal working hours.

If you’re going to enact the policy, you will have to live the policy, too. At my business, we put a lot of emphasis on families and we would never bother them outside of work time to deal with something at work.

It’s been an effective retention tool for us and it’s part of the reason the company has been featured on both local and national lists of best places to work. When employees see that you really mean what you say when it comes to keeping work and home boundaries, they appreciate it.

You can use it in job advertisements, put it in your employee handbook, talk about it during the onboarding process and any other place you think people might be interested in seeing it. Gaining a reputation as the company in your industry that guarantees not to bug employees at home can be powerful for retention and recruitment, so don’t be shy about letting people know.

4. Get something in return

When you guarantee employees that you won’t be interfering with their personal lives by expecting them to work when they’re not being compensated for it, you should expect the same courtesy in return.

It is understood at the company that I co-founded with my wife that employees are expected to be focused completely on work while they are there and not emailing or messaging people outside of work during work hours. It’s a fair expectation and one that our employees are happy to oblige with.

Technostress is an unfortunate reality in our modern age, but by making a concerted effort to cut it out of your company, you can use it to your advantage to recruit the right people for your company and retain your current talent.

Serhat Pala is co-founder of TestCountry, which manufactures and distributes instant drug and diagnostic health tests and helps businesses create and manage effective drug testing programs. Currently, he works as Chief Advisor to the company while he pursues other entrepreneurial and charitable interests. You can connect with Pala on Facebook, LinkedIn and Twitter. 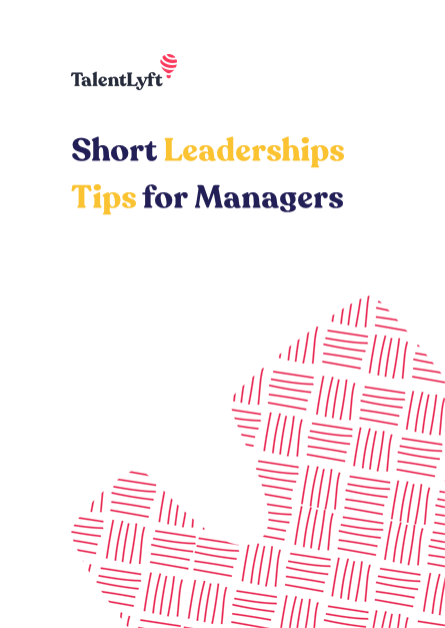